Africa In Our Kitchens: Michael Twitty at Locust Grove 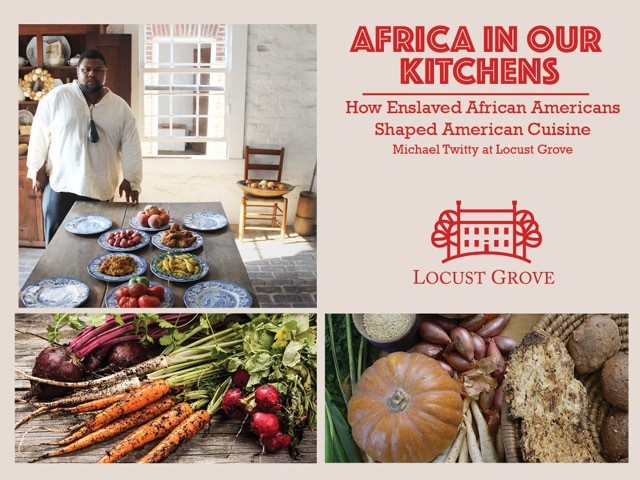 Culinary historian, interpreter, and author Michael W. Twitty visited Locust Grove for a series of workshops, presentations, and tastings May 22-May 25, 2018. Michael W. Twitty is a dedicated researcher who is committed to preserving and promoting African-American foodways and culture, and linking this to Southern food heritage. His research brings an understanding of the cultural heritage of enslaved communities and its relationship to the American South. Twitty’s week-long residency at Locust Grove explored the influence that African culture had on what has become American food through the enslaved African American experience. His book, The Cooking Gene, tracing his ancestry from Africa to America and from slavery to freedom, was released by HarperCollins in 2017, and won the James Beard Foundation Award for Book of the Year.  He’s appeared on Bizarre Foods America with Andrew Zimmern, Many Rivers to Cross with Dr. Henry Louis Gates, and has lectured to over 300 groups. He has served as a judge for the James Beard Awards and is a fellow with the Southern Foodways Alliance and TED and the first Revolutionary in Residence at The Colonial Williamsburg Foundation. Southern Living named Twitty, one of “Fifty People Changing the South.”  Twitty blogs at Afroculinaria.com.